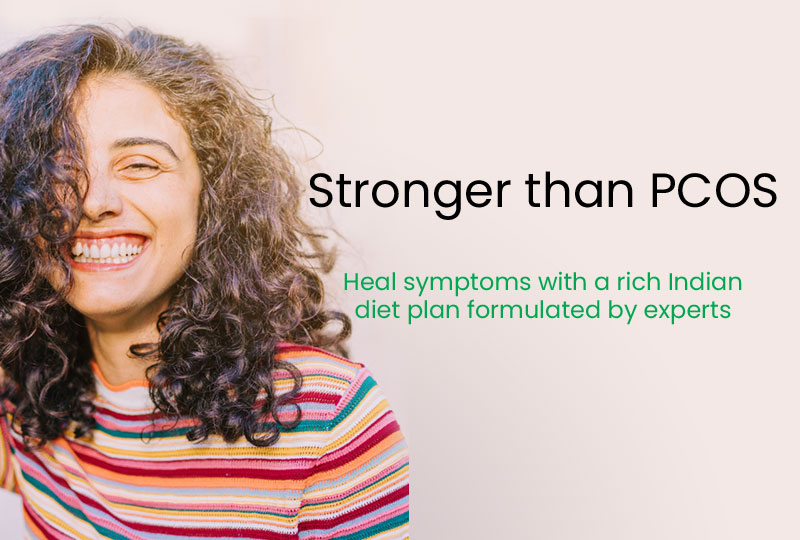 1 in every 5 women today in India has PCOS. Polycystic Ovary Syndrome (PCOS) is a hormonal condition in women. PCOS is no longer considered a disorder today that cannot be managed. A healthy diet for PCOS can help you alleviate the symptoms naturally. PCOS is a condition in which women face irregular and infrequent menstrual periods along with secondary symptoms of PCOS like excessive hair growth, heavy menstrual bleed and pain, insulin resistance, hair thinning, acne, hirsutism (elevated male hormones) that leads to the growth of dark coarse hair all across the body. Sleep apnea, mood swings, fatigue and weight gain are also additional symptoms of PCOS.  PCOS or PCOD-more popularly known in India today – cannot be treated, but the symptoms of PCOS/PCOD can be managed with nutrition, homeopathy and Ayurveda. Let’s have a look at the causes, symptoms, and diet plan for PCOD.

Causes of PCOD/PCOS The exact cause of PCOD/PCOS is not known, however, some research shows that there are a few known causes that may trigger PCOS/PCOD in women.

Consumption of carbohydrates in India is very high compared to other western countries. Studies have shown that a high-carb diet triggers PCOS. Unlike Western countries where 70% of the diet is proteins and 30% consists of carbs, in India, it is quite opposite. A normal Indian diet consists of 70% carbs supplements with only 30% proteins. So, your polycystic ovary syndrome diet plan should not contain food high in carbohydrates.

If any female member of your family, like your mother or sister, suffers from PCOD/PCOS, then there are chances of you getting it too. Even though PCOD/PCOS causes are not yet known clearly, you can still protect yourself by making a few simple and healthy lifestyle modifications and feeding your body with the right kind of food. Our certified nutritionists can help you have a customised PCOD diet chart comprising all the necessary foods that your body needs to manage the condition, for nourishment, and to boost your immunity.

Exercise, walking, and playing a sport are not an inherent part of our culture as compared to the West. A lack of exercise and increasingly sedentary lifestyles that have become characteristic of our urban existence can contribute to PCOD or PCOS.

Here are some common symptoms of PCOD and PCOS that you should be aware of.

Sleep apnea is a respiratory disorder in which a person experiences obstructed or pauses during breathing. Pauses can last from a few seconds to a minute and can occur multiple times throughout the night. PCOS/PCOD has been linked to sleep apnea.  For women with PCOS/PCOD, sleep apnea can exacerbate other PCOS symptoms such as fatigue, insulin resistance, and hypertension. Women with PCOS are twice more likely to develop sleep apnea.

Women with PCOS/PCOD have elevated levels of male hormones (androgens) that lead to the growth of coarse, dark hair all across the body, particularly in areas such as the face, chest, and back.

The imbalance of female sex hormones in women with PCOS/PCOD prevents the development and release of mature eggs. Without a mature egg, neither ovulation nor pregnancy can occur. As ovulation does not occur regularly, periods become irregular, and the increased levels of hormones such as testosterone affect the quality of the egg, inhibit ovulation, lead to insulin resistance, and increase the risk of gestational diabetes.

Increased male hormones in women with PCOS / PCOD lead to oiler skin, causing breakouts on areas such as the face, chest and upper back. A polycystic ovary syndrome diet plan can help prevent and treat this effectively and naturally.

Women with PCOS/PCOD are at a higher risk of cardiovascular diseases. This is due to the higher prevalence of obesity and insulin resistance. Approximately 70% of women with PCOS have dyslipidaemia, which causes high levels of triglycerides (TG) and low levels of high-density lipoprotein HDL (good cholesterol). Following a customised diet for PCOD can help alleviate your risk of developing cardiovascular ailments.

Many adolescents with PCOS/PCOD have higher levels of the hormone insulin, in their blood. The high levels of insulin in the blood cause patches of darkened skin on the back of the neck, under the arms, and in the groin area. This condition is called acanthosis nigricans.

High insulin is not just a symptom of PCOS/PCOD – it is also a major driver of the condition. High insulin levels can impair ovulation and cause the ovaries to make excess testosterone. So, you need to follow a diet plan for PCOD to keep your insulin levels within the normal limits.

Women with PCOS/PCOD tend to gain a lot of weight. This is one of the primary symptoms of PCOD/PCOS. PCOS sufferers may experience high insulin levels in the blood and increase the production of male hormones called androgens. High androgen levels not only lead to hair growth, acne or irregular periods, but also results in weight gain.

What Are The Best Diets For PCOS Management?

What you eat plays a crucial role in treating PCOD. Females having PCOS often happen to be obese or struggle to manage their weight. Also, several women with PCOS have higher than normal levels of insulin. So, managing the weight and insulin levels are common challenges for PCOS and PCOD sufferers. Fortunately, the diet for PCOD can help you keep your insulin levels and weight in check. Our certified nutritionists can help you have the best PCOD diet chart for weight loss and insulin management that also helps you satisfy the nutritional needs of your body and boost your immunity. A customised diet plan for PCOD also helps you have healthy insulin levels. Here’s a list of some of the best foods to include in the PCOD diet chart.

Foods to Eat When Suffering From PCOS/PCOD:

PCOS/PCOD symptoms can be managed with the right nutrition, homeopathy and Ayurveda. Health Total specialises in offering integrated treatment for PCOS/PCOD with a customised diet plan for PCOD, Ayurveda solutions, and homeopathy. PCOS itself cannot be treated, but symptoms like insulin resistance, hair growth, irregular menstrual periods and others can be easily treated with an integrated and holistic approach to the condition. At Health Total by Anjali Mukerjee, we have successfully helped many women with PCOS/PCOD. Research shows that losing only 5-10kgs or 5-10% of the initial body weight reduces insulin resistance by 50%. The weight loss also restores the normal functioning of the ovaries, which results in the reduction of male hormones, regular menstrual periods, and improved fertility.

At Health Total by Anjali Mukerjee, we combine powerful yet simple benefits of eating natural, nutritious foods by including them in your PCOD diet chart along with Ayurveda PCOD treatment, homeopathy, and a few lifestyle changes. Here are some unique features of our integrated treatment for PCOS/PCOD.

Looking for natural, gentle, and safe treatment for PCOS/PCOD? Health Total is the right place to rely upon. Our team of certified dieticians and health experts offer you a customised diet plan for PCOD along with the integrated treatment comprising homeopathic medicines and Ayurvedic solutions to treat your condition naturally. While treating your PCOS/PCOD, our health experts also develop an individualized health plan for your condition that nourishes you, treats your other health conditions, manages your weight, and boosts your immunity. So, be quick, get in touch with us online or over a call, and take a step forward to recover from PCOS/PCOD with our personalized diet for PCOD.

Visit any Health Total centres or chat with our experts or book a Free Consultation.