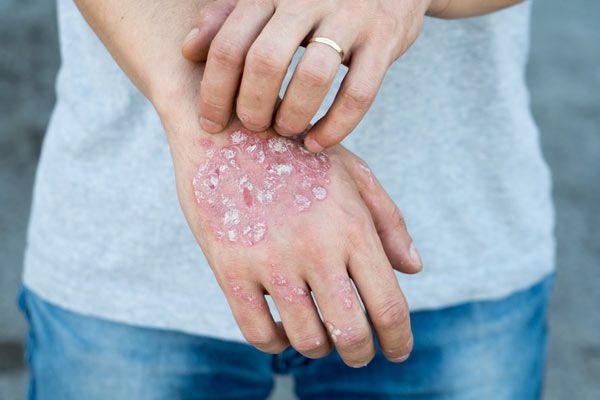 Have you ever noticed white flakes around your shoulders? Or has someone commented on your dry scaly skin? You wonder whether it is dandruff and it probably is if it’s only a light accumulation of white flakes. But in such a condition, you will realise that no amount of anti-dandruff shampoos seem to help. More than mere dandruff, you could be suffering from a medical condition called psoriasis. It is considered as a long-term disorder without a permanent cure, but there is psoriasis treatment in homeopathy, which is effective in managing the condition.

Psoriasis is an inflammatory skin disease characterised by thickened patches of red, dry, scaly skin accompanied by pain and itching. Tiny silvery pinkish flakes appear on the skin around the knees, legs, elbows, scalp, belly button and buttocks, giving the skin a dry, scaly, fish-like look. The flakes from the scalp can be easily mistaken for dandruff. Psoriasis treatment in homeopathy works wonders on people with different age groups. Homeopathic medicines for psoriasis are popular as they do not have any side effects.
Most people view psoriasis as an infectious and contagious disease. But neither of this is true. It is not an infection, and neither is it contagious. In fact, psoriasis depends on heredity and is largely couriered through the gene route. The symptoms generally appear in the mid-20s and it is more rampant in cooler climates than in the tropics. Try psoriasis treatment in homeopathy to manage the condition naturally!

The major culprit that sets off psoriasis is stress. The more tensed you are within, the more red inflamed patches you will find on the exterior! Apart from stress, the following are the causes of psoriasis –